I recently overheard someone say, “aren’t we so lucky to live in a civilized society?”

My critical mind decided to pick this one apart, because from my seat at the table, I fail to see many aspects of this American society as civilized.

Before you scroll down to the comments to verbally disparage my entire existence (which, by the way, is not very civilized), hear me out.

I don’t mean to sound ungrateful. I realize my fortune. I’m fed, I have a roof over my head, I wasn’t forced to marry at the age of seven, and I’m surrounded by the advancements in industry that allow me to access things like medicine, electricity and the no!no!™ Hair Removal System. But I’m talking about the bigger picture.

So I decided to consult with my dictionary app for the definition of civilized. Here is what I found.

I’ll dispense of well-bred since it’s an antiquated term that rose out of toxic aristocratic thinking (despite its origin in breeding animals). But I will say that my friends and associates are polite and refined enough to resolve issues without the use of fists, poison or sharp things. We understand the laws without having to be reminded.

Within different geographical regions and socioeconomic classes, however, the laws aren’t as clearly understood.

For instance, a woman could file for a divorce from her cheating husband. This would be a logical and legal solution. But this woman may hail from a subculture that dictates that a better solution would be to take a machete to his man part, then burn down his mistress’s apartment. (It’s safe to assume that neither of these would be done in a polite or refined manner.)

Which brings me to the next definition.

Easy to manage or control; well organized or ordered.

Yes, the dismembering arsonist wife is an extreme example. But there are plenty of American citizens ignoring the laws and opting for solutions that only make their lives (and the lives of every district court judge) more difficult.

At this juncture I’d like to point out that the television series Cops has 28 seasons.  TWENTY-EIGHT.  At thirty episodes per season, that’s roughly 840 episodes of examples of Americans clearly not easy to manage or control.  And these aren’t just the folks on the societal fringe.  They’re coming from all walks of life.

Based on these examples – not to mention the drug epidemic that grips this country – one could begin to at least consider that America may not be the most civilized society. Just consider.

Now, here is the definition that perplexes me the most.  This is the first definition given on the dictionary app:

Having an advanced or humane culture, society.

So by this definition, in order to be civilized, a society must be advanced and humane. Again, what does this mean?

In an article written by Sara Ipatenco on eHow.com, she highlights characteristics of a civilized society. In addition to a central authority, as discussed above, there were three that stood out for me; particularly in how they apply (or don’t exactly apply) to the American culture.

“Education is used to pass down the morals, values and beliefs of the society, as well as provide access to reading, writing, mathematics, art, music and other subjects to enhance the value and enjoyment of the civilization.”

Education is great. It’s mind-expanding. It opens up worlds. It creates opportunities. Until it doesn’t anymore.

Until the aforementioned government cuts funds to it. Until bloated bureaucrats decide what’s important to learn and what isn’t (literature, music, any of the arts are first on the chopping block). Until enthusiastic young people eager to teach realize the amount of time they’ll have to spend being testers rather than teachers.

Furthermore, higher education has become so expensive that those who are even lucky enough to acquire it come out of their respective institutions buried in the kind of debt that would make a hardened Marine openly weep.

“Access to food and clean water is a characteristic of a civilized society.” 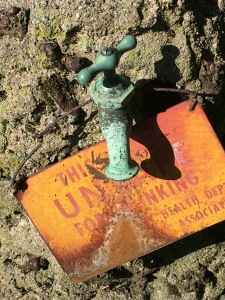 I live in a city on the northern edge of Detroit. Just an hour north of here, the city of Flint is still reeling from a water crisis. Children, more specifically poor black children, are sick from lead poisoning – lead that our government officials knew was there for far too long and did nothing about. There’s no joke to be made here.

Bottom line – a civilized society doesn’t decide who gets healthy water and who doesn’t. It certainly doesn’t knowingly poison its citizens. Especially its children. That is the definition of a criminal society.

“The specific freedoms of any society will vary, but people within any civilized society are afforded certain freedoms such as the freedom of religion, the freedom of speech and the freedom to pursue higher education.”

I was tempted to look up the word freedom, but it’s a word fraught with so much emotion in the American culture that I decided to forgo it. For now.

I do know that by some twist in logic (or perhaps lack of the aforementioned education), there are Americans who think that freedom means believing only in what they believe in as the white Christian majority. They view a Jewish person putting up a menorah, an immigrant opening a business or a Muslim person speaking (or simply existing) as a huge threat to their freedom – the very freedom upon which this country was purported to be built and of which they are so very proud. (They are also under the delusion that God Bless America means the same thing as God Screw Everyone Else and willing to back a presidential candidate who says as much.)

To be honest, I’m not sure that any society can be purely civilized as long as it is comprised of humans. At least not this current crop of humans. But I do feel there are other societies doing a better job of caring for their citizens and the planet on which we live than the American society. Just as there are others doing worse.

But if you’re still convinced I’m anti-American and that we live in a purely civilized society, well, that’s your freedom.

And aren’t you lucky to live in a such civilized society?